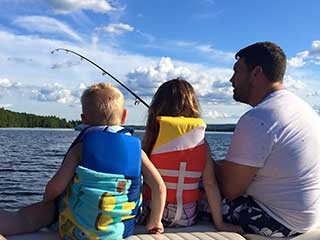 It’s late June in Maine and the bass fishing is in full swing! Although I grew up at our family camp in Belgrade, I have only really been fishing for a couple of years, ever since Major League Fishing filmed their tournament in Maine. I guess I caught the bug, because now I try to get out on the water as often as I can. It’s not uncommon to find me on the Kennebec River early morning before the kids wake up, and during the weekends you are likely to find me on our boat with my wife and four kids at any one of the area lakes. And in the evening you may find me and the family fishing from shore in a local pond in Fairfield, down by the Kennebec River, or at our family camp on Long Pond in Belgrade.

I recently watched a video clip from Bass Pro Mike Iaconeli where he spoke about getting kids interested in fishing. He suggested tying on a jighead with a small finesse swimbait-style grub to show the kids how to cast and reel for bass. I bought the Berkley Powerbait 3” Ripple Shad that he used, threaded it onto a basic ball-head jig and gave it to my six-year old daughter to try. She cast it out near a dock and immediately hooked a nice little one-pound bass. She was so excited as she got it to the boat, and later was telling the story of how it was the biggest fish that she had ever caught.

Fishing in the Mid-Maine region is awesome. The bass populations on the area lakes and rivers make most fishing outings fun and productive. Whether I go out alone and catch a dozen smallmouth before work, or out with the family and help them catch a bunch of fish during the weekend, there is a sense of peace and enjoyment that comes along with being on the water.